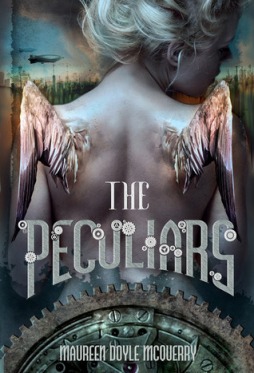 This dark and thrilling adventure, with an unforgettable heroine, will captivate fans of steampunk, fantasy, and romance.

On her 18th birthday, Lena Mattacascar decides to search for her father, who disappeared into the northern wilderness of Scree when Lena was young. Scree is inhabited by Peculiars, people whose unusual characteristics make them unacceptable to modern society. Lena wonders if her father is the source of her own extraordinary characteristics and if she, too, is Peculiar. On the train she meets a young librarian, Jimson Quiggley, who is traveling to a town on the edge of Scree to work in the home and library of the inventor Mr. Beasley. The train is stopped by men being chased by the handsome young marshal Thomas Saltre. When Saltre learns who Lena’s father is, he convinces her to spy on Mr. Beasley and the strange folk who disappear into his home, Zephyr House. A daring escape in an aerocopter leads Lena into the wilds of Scree to confront her deepest fears.

In compliance with FTC guidelines, I received this book from Netgalley.com

This turned out to be a really fantastic book! At first I wasn’t quite sure how to react to it, it’s rather odd little mix up when you first start out. The though of a steampunk type era and as well as the addition to people called Peculiars made me kind of hesitant, it’s not a genre I read often though that really needs to change.

The writing is utterly Victorian, or so I feel, and it has a crisp and clean feel about it. I thought that the writing style really gave a unique characterization to everything and helped add a depth and voice to to the characters and the world surrounding them. The steampunk aspects are actually more of a pre-steampunk era, as things are not quite there yet but the advancements are clearly being made. It gives you something that a novel set in the full swing of steampunk doesn’t, it makes the very idea of possibilities seem so endless and fresh. Instead of a book where everything is already set up and you simply come to terms with it, you get to learn about it before everything is set in stone just like the main character. It’s not a huge part of the story but it’s certainly a very present aspect and it makes the experience unique. The concept of Peculiars is also a really unique idea to through into the delightful mix. As the summary above says and the cover attests to, the Peculiars are very…well Peculiar. I loved how their odd little traits are examined and how once again Darwin is introduced to “help” explain things. The one thing about the world that I didn’t quite like was the fact that you don’t quite know where you are. At first I thought it was something entirely made up, after all I know of no place ever called Scree, but as you continue reading you realize that it is in fact set in our very own world. It’s not hard to believe, however I wish it would have been explained more throughly as it’s a bit confusing to place where this place is exactly.

The characters are pretty endearing and unique as well. Lena is fairly strong willed and has a good head on her shoulders, even if at times she’s a tad too headstrong but that is such a refreshing change to all of the mold-able female main characters. I truly felt for her in her situation and I really wanted her to find her place. Her character does come of slightly flawed at times though. There isn’t much personal growth or development for her as the story progresses and at times she seems to become increasingly trusting all of the sudden. Jimson is a darling character and was really enjoyable to read about. He has such a passion for life that’s hard to not to like him, at times his enthusiasm for learning things seems to be almost child-like. The other characters in this are also enjoyable even if they don’t end up as fleshed out as one would hope, I would love to know more about Mr. Beasly personality-wise.

Overall it’s a really interesting book and the plot is one that really piques curiosity, added to the fact that it’s a pretty light read it makes for a great relaxing read.

This entry was posted in Book Reviews (2012) and tagged 4 stars, fantasy, review. Bookmark the permalink.

2 Responses to Review: The Peculiars by Maureen Doyle McQuerry