Posted on September 28, 2013 by Michelle @ In Libris Veritas 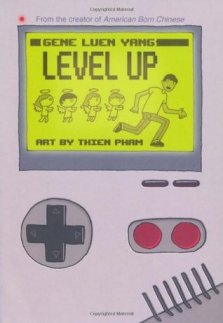 Dennis Ouyang has always struggled in the shadow of his parents’ expectations. His path is laid out for him: stay focused in high school, become a gastroenterologist. It may be hard work, but it isn’t complicated…Until suddenly it is.

Between his father’s death, his academic burnout, and his deep (and distracting) love of video games, Dennis is nowhere near where his family wanted him to be. In fact, he’s just been kicked out of college.

And that’s when things get…weird.

Four adorable–and bossy–angels, straight out of a sappy greeting card, appear and take charge of Dennis’s life. And so Dennis finds himself herded back onto the straight and narrow: the path to gastroenterology. But nothing is ever what it seems when life, magic and video games collide.

Level Up is a quirky, fun, and emotional graphic novel by one of my favorite graphic novel authors. This is a coming of age story focused around Dennis, a college student dealing with his father’s death and his video game addiction.

I really liked the set up and style of this one. It’s kind of laid back and really delves into the problems a lot of college students have…distractions. In college everything can be a distraction; gaming, friends, family, stress. So in that aspect the book is very easy to relate to. It also has a surprising touch of emotion as Dennis slowly comes to terms with the death of his father as well as the path his father wanted him to pursue. Of course he doesn’t go through all of this without help and there enters the four greeting card angels and their good intentions…that turn into bossy suffocation.

I love watching Dennis learn and grow as a person and as a student, and I love that not everything with his father was a cut and dry as he thought it was. It a touching coming of age story that can really be enjoyed by everyone especially those in college or about to enter it.

This entry was posted in Book Reviews (2013) and tagged 4 stars, graphic novel, review. Bookmark the permalink.