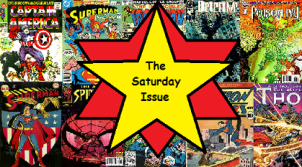 The Saturday Issue focuses on the more visual books read here at In Libris Veritas; ranging from graphic novels to manga to game companion guides.

*
*I receive a small monetary kickback from Amazon purchases
Rating: 3.5/5

The first volume of Mass Effect 2 and 3 lead writer Mac Walters’s gripping series Foundation, set during the events of BioWare’s smash hit science fiction trilogy! Introducing Rasa, a mysterious agent working behind the scenes for the Illusive Man and his human-survivalist paramilitary group, Cerberus! First, learn how she began her life as a covert operative – then, follow her investigations and witness formative events in the lives of signature characters Urdnot Wrex, Ashley Williams, and Kaidan Alenko!

Foundation Vol.1 is kind of like a prequel and connector book  for Mass Effect 1. We have a new character Rasa, who works for Cerberus, a bit of back story for Wrex, just what happened to Ashley on Eden Prime, and Kaidan’s rather odd training as a biotic.

Mass Effect is one of those game franchises that just keeps giving and even when the stories are only so-so it’s still really fun to read them. Rasa is an agent for Cerberus, a pro-human group, and she’s willing to do nearly anything to get the information she needs. Her own back story is interest enough, but not the most riveting, she’s just another down and out person who had to carve out a space for herself in the universe. However she does give reason to learn more about the characters and she adds a bit of mystery to the overall story. The story surrounding Wrex is alright, but I don’t really feel it added too much to what we already know. He’s after Fist and we get to see how the mission starts. Then come two of my least favorite characters Williams and Alenko. I did really like seeing Williams before she meets Shepard and just how her and her squad end up on Eden Prime. Alenko’s story is probably the most interesting though. It shows his life in a biotic training facility, where the lessons are tough and unorthodox…and Alenko is pushed the edge.

The art in this series is not my favorite though and I found some of the pictures a bit hard to comprehend upon first glance. I’ve never been fond of the more sketchy type art, but there are some scenes in which the artwork really shines.

I do look forward to seeing more of Rasa and her mission to gather info on the crew of the Normandy, it seems like it has a lot to offer and I’m always look for an excuse to get re-absorbed into the ME world.