Mini-Read Review: Into the Temple of Shadows by Rhiannon Frater 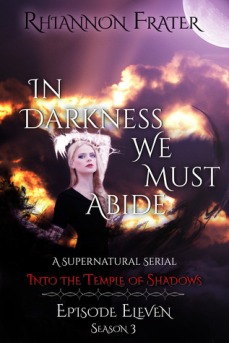 *
*I receive a small monetary kickback from Amazon purchases
Rating: 5/5

The Socoli Mansion is in ruins. Roman’s vampires have been butchered and their havens burned in Aeron the White and Terrible’s ghastly purge. Separated from her sister and lover, Vanora is accompanied by Greg, the sleazy incubus that saved her from Aeron’s clutches. As she struggles to make sense of the destruction brought upon her by an ancient prophecy, the players in the upcoming battle prepare for the final power struggle.Vanora’s only hope to escape her destiny and save those she loves is wrapped in a magic ritual that will not only reveal the supernatural conspiracy formed by a millennia of magic, but unlock her secret powers.

AH! It’s the start of a new season for In Darkness We Must Abide! I’m trying to keep my fangirling to a minimum but I’ve been dying to know what happened after last seasons ending and I finally get to find out!

So right off the bat we get to learn more about some background on characters! Greg is playing a bigger part, and as sleazy as he is I love him! It’s great seeing him be around Vanora who is not interested in taking any of his crap and pretty much his exact opposite. We even get to learn more about Carlotta, including her past and her connection with Armando.

Without saying too much we also get to see what Leto is up to, and learn a bit more about what Vanora is truly capable of. I can’t wait to see what Vanora is like once she “powers up” and gets her self ready to face off with Aeron. It’s even cooler now that we have some werewolf lore and history being thrown in, and we even get a taste of the ‘origins’ of the vampire!

So once again Rhiannon has given us an episode worth freaking out over and I can’t wait to read the next one!

This entry was posted in Book Reviews (2014) and tagged 5 stars, fantasy, horror, review. Bookmark the permalink.

4 Responses to Mini-Read Review: Into the Temple of Shadows by Rhiannon Frater