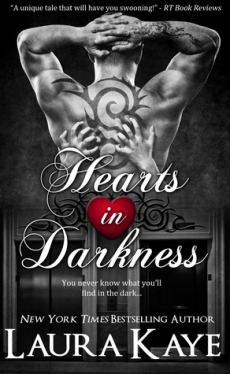 Makenna James thinks her day can’t get any worse, until she finds herself stranded in a pitch-black elevator with a complete stranger. Distracted by a phone call, the pin-striped accountant catches only a glimpse of a dragon tattoo on his hand before the lights go out.

Caden Grayson is amused when a harried redhead dashes into his elevator fumbling her bags and cell phone. His amusement turns to panic when the power fails. Despite his piercings, tats, and vicious scar, he’s terrified of the dark and confined spaces. Now, he’s trapped in his own worst nightmare.

To fight fear, they must reach out and open up. With no preconceived notions based on looks to hold them back, they discover just how much they have in common. In the warming darkness, attraction grows and sparks fly, but will they feel the same when the lights come back on?

Hearts in Darkness is a quick read with a really unique and completely fun premise. At first glance this seems like it could be once of those darker romances, where the heat is mixed with a heavy story…but in reality Hearts in Darkness has a very light tone to it despite the heavy topics they two characters breech.

I love, LOVE, Caden and Makenna. They start out as two strangers, who have barely even glanced at each other before the power goes out and leaves them stranded, but by the end they have an undeniable chemistry between them that I was questioning why more people don’t find their partners in elevators. Caden made me want to cry for him, but more than that it made me want to do exactly what Makenna did and hold him, get to know him, and comfort him. His tattoos and piercings already marked him as sexy in my book, but his openness and vulnerability with Makenna made him perfection. I loved that the connection between the two of them didn’t relay on physical appearances, but instead on the sheer intamacy of being close to someone, talking to them, and in some ways relaying on them. Their connection came through something much more visceral than simple visual attraction, and that alone makes an already steamy scene practically irresistible.

It’s a rarity that a book this short provides both the chemistry AND the reader connection neccessary to actually know who the characters are as people, but Hearts in Darkness manages to do that perfectly. We get glimpses of Caden and Makenna’s life outside of that office building while they are in the elevator, and even more towards the end leading up to the second book.

This is my first Laura Kaye book, but it certainly won’t be my last. I’m already anxiously waiting for the release of the second book, and looking into trying out her other series as well. If you are a fan or if you enjoy smaller bites of romance then this is one not to miss out on.

This entry was posted in Book Reviews (2016) and tagged 4 stars, contemporary, review, romance. Bookmark the permalink.